If you’d told me a year ago that I’d be writing a blogpost in July 2016 about how EFF and TorProject supporters are actively censoring free speech on the internet, I would have thought I’d be writing it for The Onion.

I have supported and amplified for EFF, the Tor Project and related organisations, staff members and campaigns relentlessly, for years. As a ‘Person of Interest’, I have relied on their enterprises to keep me safe. I have defended them ideologically and in principle, when they have been unfairly under attack.

In the first part I analysed the copy of the smear website used to destroy his reputation and career. In the second part, I proved that nearly all of the main characters involved had been publicly lambasting WikiLeaks in the years prior to grouping up to take down Appelbaum.

Although the only promotion I did for the articles was a couple dozen tweets, they received many thousands of hits each, likely because they were the only serious long-form articles available providing a critical look at the allegations against Appelbaum.

Other authors and analysts were understandably shit scared of being labeled a rape apologist by the massive online lynch mob that had been assembled and unleashed upon anyone who dissented against their position. Those fears were well-founded, as a cabal of sock-puppetTwitter accounts rumoured to belong to some of the accusers themselves, relentlessly trolled the ‘ioerror’ search results, lambasting anyone who dared question the allegations or related areas of concern.

However, one publication was brave enough to pick up and republish my work – an online magazine called The Indicter, run by a group of Swedish Human Rights intellectuals, including several PhD’s.

That website was then cited on Jacob Appelbaum’s Wikipedia page. One of the most vociferous anti-ioerror sockpuppets, by the name of @VoodooHacks, picked up on it, and described my articles as ‘partisan blogs‘. 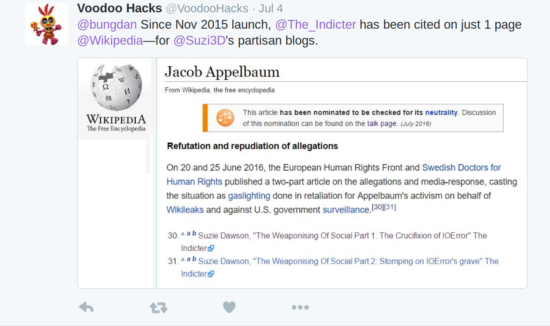 A Wikipedia moderator named Kenneth Freeman, responded that he had deleted the references as ‘a biased, unreliable source.’

According to his Twitter bio, Kenneth Freeman associates himself with both EFF (the Electronic Frontier Foundation), and the Tor Project. 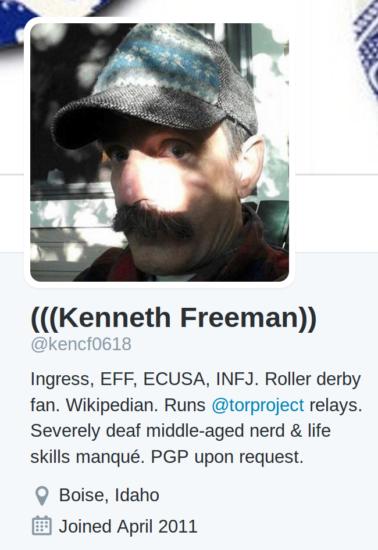 According to Wikipedia’s rules on “Conflict-of-interest editing” this should logically preclude him from making editorial decisions regarding Appelbaum’s Wikipedia page.

Indeed Wikipedia states: “If you have a Conflict of Interest, you are strongly discouraged from editing effected articles.”

Furthermore, in it’s ‘Best Practices for Editors with Close Associations‘ it is stated: “Be up-front about your associations with the subject” and “Avoid making controversial edits to articles”.

However, the edit log shows that Kenneth has edited the page more than a dozen times since the allegations against Appelbaum arose.

One person in particular was exuberant over the removal of the references to my articles: the Christian Science Monitor’s Dan Murphy. 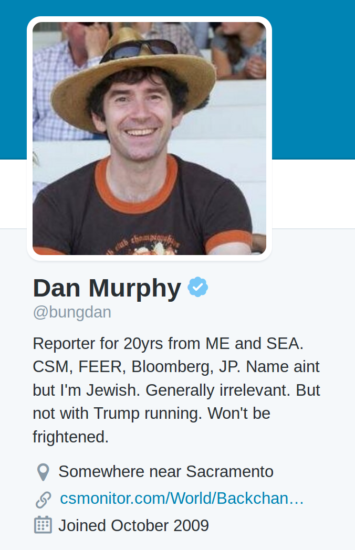 Looking further into the past, it seems that Murphy had past beef with Appelbaum: 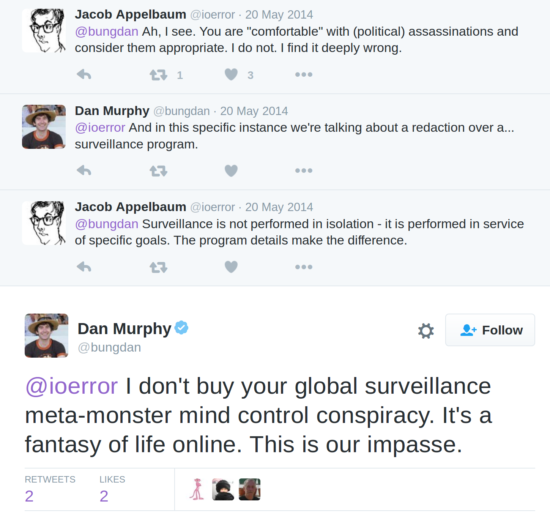 I knew I’d seen Murphy on Twitter, but initially couldn’t place it. However it’s not every day you get misquoted by someone with a blue tick, so I soon remembered – it was the same person who had written the below misrepresentation of my article: 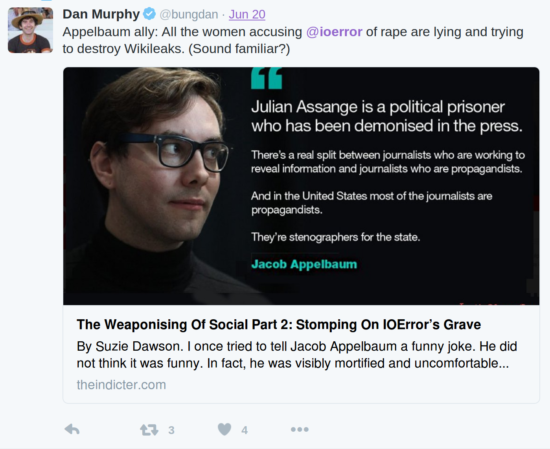 To state the obvious, I have never said that “All the women accusing ioerror of rape are lying”. Those words have been wholly invented by Murphy, paraphrased and falsely attributed to me.

For starters, the statement “All the women accusing ioerror of rape” is a literal impossibility as only one person has accused ioerror of rape. One other, of sexual assault.

Every other person has accused Appelbaum of a bunch of vague actions that range from propositioning someone to embarrassing them in front of workmates, kissing them or ‘washing’ them.

As things currently stand, in order for Appelbaum to not be a rapist, only one person would have to be “lying” – and I certainly did not accuse her of that – or to have been belatedly convinced that what she experienced was rape, which would be supported by the first sentence of her own account of what happened, which describes precisely that scenario having occurred.

For Appelbaum not to be guilty of sexual assault, only Isis Lovecruft would have to be “lying”. I didn’t accuse her of that either.

Regarding the other claims against ioerror it is likely, given the content of Appelbaum’s own statement, that some of the superfluous accusations have some founding in reality, as he states:

I want to be clear: the accusations of criminal sexual misconduct against me are entirely false.

Inevitably, there may have been moments in my professional or private life when I may have inadvertently hurt or offended others’ feelings. Whenever I was aware of these instances, I have, and will continue to, apologize to the friends and colleagues in question and to continually learn how to be a better person. Though the damage to my reputation caused by these allegations alone is impossible to undo, I nonetheless take the concerns of the Tor community seriously.

But the obviousness of the above facts escape his accusers and their supporters, who have put all their eggs in the “ioerror is a rapist” basket and refuse to look critically at the wider picture.

It seems there may be a concerted effort to have me declare that the women involved are all lying, as I had received a query along these lines from another sock puppet account heavily engaged in denouncing Appelbaum: 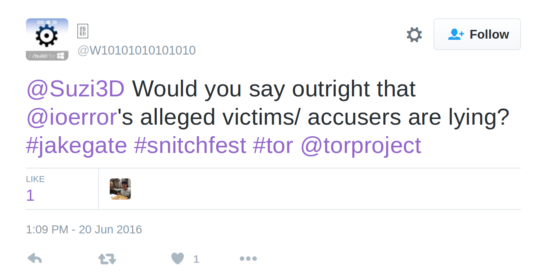 As well as engaging me frequently, the above account had been particularly concerned with why I hadn’t, and then later why I had, signed ourresponse.org – a website established by journalists, academics, researchers and others in support of due process for Appelbaum.

A board member of FreeAnons has accused the above account of being a sock puppet of Isis Lovecruft herself: 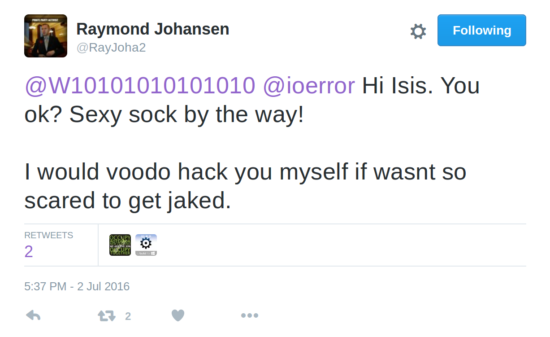 The account retweeted but did not deny the accusation.

If it is true, it would make an interesting partial timeline of events.

June 12: The sock-puppet account asks me why I hadn’t signed ourresponse.org

June 13: The post by Isis outing herself as an accuser of Appelbaum is written, but ostensibly not publically released.

June 14: The sock-puppet account asks why I -had- now signed ourresponse.org

Strangely, of all people, Dell Cameron of The Daily Dot had announced on Twitter that some victims would out themselves, several days ahead of time.

That a journalist who is infamous for defending if not openly advocating for the FBI informant ‘Sabu’, to the endless consternation of many, would be privy to such information is telling.

Why, of all people, would he become the journalist of choice for Appelbaum’s accusers? Who are supposedly pro-whistleblower pro-free speech pro-privacy activists?

As mentioned in my Contraspin articles – Sabu was one of the first to leap on the recent ioerror witch-hunt bandwagon – soon followed by @6, the informant who put Chelsea Manning behind bars.

Sabu, of course, also had a long-standing feud with Appelbaum, who said Sabu had also tried to entrap him.

While Sabu claims that Appelbaum was not an FBI target – an idea that is laughable given that years prior, the FBI had showed up at a speech Appelbaum gave in lieu of Julian Assange, hunting the latter – Appelbaum was sufficiently a target for the US Department of Justice to gag Google over the seizure of Appelbaum’s personal records, as reported by The Intercept: 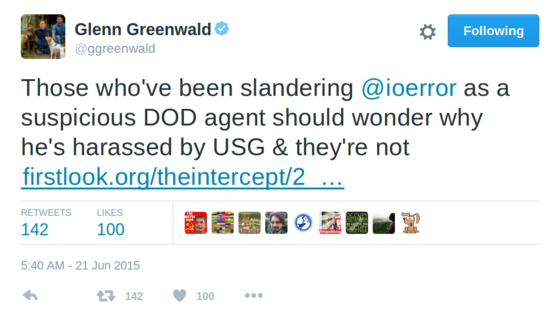 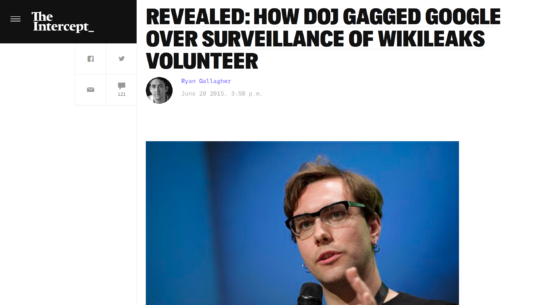 So yes, Jacob Appelbaum was a target of the US Government, who are no doubt overjoyed not only at the desecration of his reputation, his almost wholesale removal from the stages on which he shared pleas for people to leak sensitive intelligence information, to take direct action at NSA sites, his revelations about the dystopian surveillance complex affecting us all and of the tactics being employed against persons of interest.

Likewise, those who wish to compromise the architectural integrity of the Tor network will be overjoyed at the recent removal of Jacob’s Tor directory authority. 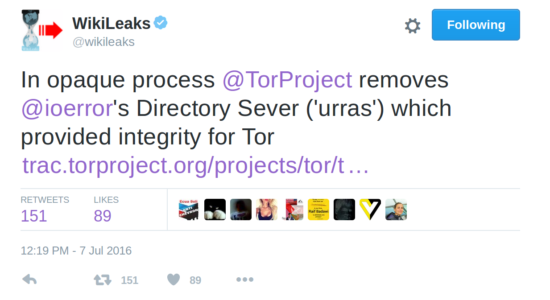 As usual, the rabbit hole turns out to be so much deeper than the original intention behind this post, which was just to write about the Wikipedia whitewashing being engaged in by an EFF/Tor supporter who is also a Wikipedia moderator.

The history of such whitewashing is long. According to Wikipedia itself, conflict-of-interest editing has been undertaken by many dubiously-motivated parties including the Central Intelligence Agency:

That would of course, be the same CIA that is now revealed to have had an employee resign one day and become a Tor employee the next – much to Jacob Appelbaum’s chagrin at the time:

True free speech activists are unafraid to allow those who disagree with us, their opinions or their platform. They do not harass or abuse those who will not tow their lines.

The suppression of dissent and targeting of people like Jacob Appelbaum is par for the course for intelligence agencies and associated corporations.

It is frankly an eternal shame and disgrace that supposed free speech activists can now be added to that list.