The recent saturation of the Internet in anti-refugee propaganda, including via hashtags like #Rapefugees, #WhiteGenocide & #IStandWithSweden, have shocked and appalled users worldwide.

Long-held and widely-touted constitutional principles of inclusion and multi-culturalism are laying in tatters and the democratic ‘Left’ of Europe is reeling, as the hate speech extends beyond the digital realm to the formation of nationalistic vigilante mobs who are demonstrating en masse, burning down refugee centres and attacking migrants throughout Europe, Scandinavia and the entire Western World.

Echoing events and rhetoric of 1930s Germany, many cannot believe that a return to the widespread and popular denunciation of entire ethnic groups is again occurring, or that such behaviour is achieving political results.

When populations are implored to detest a demographically diverse sub-sector of society, that group is homogenised by the use of caustic and derogatory blanket terminology. That language of fascism is again manifesting.

Utterances of highly abrasive terms like ‘cockroaches‘ in reference to migrants and refugees is reminiscent of the lead-up to multiple genocides where the same word was employed as justification for the attacks – from Hitler deeming Jews ‘cockroaches‘, to Hutus using the same term to describe the Tutsis that they were massacring in Rwanda, to Rabbi Ovadia Yosef, who called the Palestinian people ‘cockroaches‘ when openly proposing their wholesale annihilation.

The practice of using a repeated and heinous invective to socialise a citizenry into villifying and ultimately acting against other groups has been extensively studied.

It is well established that the precursor is the formulation and circulation of propaganda.

Tweets like this have been appearing in their thousands, and are then copied and circulated exponentially.

Depicting what is implied to be a blonde European girl being accosted by males of Middle Eastern origin, it is easily taken at face value. However, the picture isn’t at all what it seems. The girl is not European. She is also Middle Eastern; and it isn’t a photograph at all. It is in fact, a still shot taken from a comedy video, a parody – where in the next scene, the girl is rescued by an Arabic ‘Superman’ figure, replete with costume.

In a ‘Last Week Tonight‘ episode from September, 2015 titled ‘Migrants and Refugees‘, host John Oliver calls out Fox News’ circulation of a video of what is purported to be refugees chanting ‘Allahu Akhbar‘ (God is great) on a train within Europe’s borders.

“Describing that as a new video that sheds light on the migrant crisis is a little misleading because in researching this story, we found a version of that same video uploaded onto You Tube back in 2010, well before the migrant crisis even began.” – John Oliver

Some of the propaganda comes from the obvious sources – such as Trump supporters. But a lot of it is derived from places that are less obvious, or more obscure.

Refugees Under Attack, Smeared As Rapists

You Tube is awash with countless examples of anti-Muslim/anti-refugee propaganda. The content is often obscene in nature, and although they won’t be directly linked to here, the uploads feature inflammatory titles such as:

* ‘Sweden Being Raped To Death By Muslim Migrants’

* ‘Sweden Now Rape Capital of Europe Thanks To Muslim Migrants!’

* ‘Islam Is The Religion Of The NWO’

Given that Europe is directly embroiled in the turmoil, you would expect these videos to be posted by Europeans. However, a closer look at the accounts posting the content, frequently leads back to American, British and Israeli sources.

The titles mentioned above are all featured on the channel “THEINFOWARRIOR” which is an off-shoot of Alex Jones’ Info Wars. Info war indeed.

Unfortunately, that damage is also being inflicted by a multitude of other actors pushing politically-charged propaganda, to the detriment of refugees, migrants, Muslims and Islam as a whole.

‘Muslims Have Made Sweden The Rape Capital Of The West Vs Japan‘ says ‘thetruthdamit’, who is ostensibly an African American Trump supporter.

One of the most prolific (and apparently widely-watched) channels, is by British ex-comedian Pat Condell.

Featuring titles like ‘Message To Offended Muslims’, ‘It’s Good To Be Anti-Islam’, ‘Why I Support Israel’, ‘Sweden Goes Insane’, ‘Boo Hoo Palestine’, ‘The Rape Of Sweden’, ‘The Invasion Of Europe’ and ‘How To Insult A Progressive’, one might wish he had never quit comedy so that they could give him the benefit of the doubt.

However, the nature of his politics is abundanty clear and Condell also has a Twitter account, featuring some 47,000+ followers, on which he has posted this fascinating breakdown of the geolocations of his viewing audience. 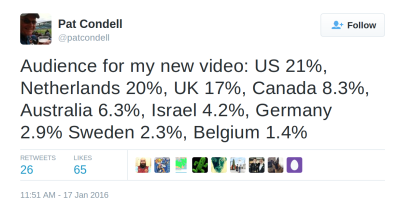 Of his top six viewing countries, four are members of the Five Eyes alliance and one is Israel.

The Elephant In The Room

The elephant in the room is that the REAL rape epidemic is global in nature and pre-dates the migrant crisis by, frankly, eons.

Rape being used to push a political agenda that is to the benefit of governmental and military interests, rather than the interests of rape victims themselves, is an oft-employed information warfare tactic that has been used in everything from passing legislation that is unfavourable to civil liberties, to smearing Julian Assange.

On Twitter, accounts featuring traumatising and emotive profile pictures of rape victims are used to push xenophobia and notions of white supremacy.

This is the reality that none of them will dare acknowledge: that sexual violence and rape is and always has been at epidemic levels in Western civilisation – where assaults are frequent and widespread; reporting, arrest and conviction statistics are abysmal and sexual aggression, misogyny and rape apologism are commonplace and tacitly endorsed if not constantly celebrated and perpetuated by mainstream media, political and pop culture.

This recent portrayal of rape, gang rape and sexual assault as being a ‘Muslim’, ‘Islam’, ‘Middle Eastern’, ‘Third World’ or ‘refugee’ problem is a completely disingenuous display of wanton ignorance.

While some may argue that the alleged scale of the attacks seen in Cologne and elsewhere mark a turning point – and they certainly are heinous and deplorable crimes – the statistics demonstrate that in fact the United States remains the global center of rape and sexual assault, with 1 in 6 women experiencing sexual assault within their lifetime, and 1 in 4 college students.

According to this link Sweden already was the so-called ‘rape capital of Europe’ in 2010, despite the fact that its rape statistics are constantly touted as being a result of the recent influx of migrants.

So what, or more pertinently, who is behind the refugee propaganda? Whose interests do the rise of nationalism and the far-Right really serve?

[Author’s note: this article was originally composed on January 18th, 2016. It was the prequel to “The Agenda To Destabilise Europe” but sat on a publishing queue of another website for some months before now being published here.]