The recent OMG-Tor-is-government-funded #TorGate “scandal” and the on-going anti-Tor Pando/Yasha Levine campaign has disturbing parallels and despite thousands of words spilled onto digital pages, the most significant implications have been largely ignored.

This should not come as a surprise to anyone. When I recently applied for a passport renewal, the staff at the Department of Internal Affairs operated their computer from a USB stick. When I made this observation on Twitter, Yasha Levine himself retweeted it.

Why are  our governments using these technologies? There is only one rational answer. They are best practice. When operated correctly, they actually work.

If Tails/Tor etc are being entrusted with the most sensitive data that governments hold, then they clearly are among the best tools currently available for protecting data integrity and privacy.

So what’s the problem?  Why all the fuss? Well it’s pretty simple. If use of these tools is best practice, it doesn’t mean the government wants you to use them.

Widespread uptake and competent use of these tools would create a level playing field that is inherently unattractive to power. Access to technology has always been the great divide between the have’s and the have-not’s.

While some argue that because the larger the number of nodes, the greater Tor increases in potency, this strengthens Tor as a program and network, but makes it less controllable by government.

These days, Tor is entirely open-source, which gives it the ability to muster significant voluntary manpower that could theoretically rival the resources of government.  That the recent TorGate attacks are focused upon the developers – those at the coal face of the architecture, development, testing and strategic direction of Tor, is rather telling.

Recent disclosures of NSA documents have demonstrated that all you need to do to get yourself on a watch-list these days is to run Linux or to be a commercial sys admin (systems administrator) by trade. In this environment, is it surprising that the government is both targeting users of Tails/Tor etc, while simultaneously enjoying the benefits of the technologies, itself?

Or is its desire to stonewall public access to anonymizing tools indicative of a greater complex of privilege and entitlement, as evidenced in many other sociopolitical areas of modern life?

In the days of “Collect It All” it seems that if you aren’t using Tor, all your communications and files are being collected by the government anyway – explaining why if you are using it, you get relegated to the watch-list to be targeted individually. The occurrence of this targeting lends to both the efficacy of Tor and the unquenchable desire of the state to retain and purview all of your private information, at whim.

The Open Source Movement  & The War on Innovation

Anyone who thinks open source developers aren’t targets of the state should try becoming an effective one and see what happens to you. The Open Source Movement is both a source of pure hope for the betterment of humanity, and a perceived threat to industry and government.

Developers that bow out of the corporate arena to pursue open source projects are often maligned and attacked and preyed upon by detractors and competitors.

Yet despite this, both industry and government utilize open source tools for their own benefit. This is a hypocrisy that has been demonstrated elsewhere.

In the recent Dirty Politics scandal in New Zealand, Wikileaks partner Nicky Hager blew the whistle on a number of major misdeeds being performed by government Ministers and employees in New Zealand.

One of the revelations is that these political operatives bragged to each other of using Tor/Tails.  Yet they are ideologically and actively set against the proponents of internet privacy and net neutrality.

They despise and ridicule Kim Dotcom. They have written dozens of smear posts about him, despite his incredible contributions to software development in New Zealand, and Mega’s advances in anonymizing technologies. They equally dislike and work to undermine the Julian Assange’s, Edward Snowden’s and Jacob Appelbaum’s of this world.

The Dirty Politics cabal continue to act against the public interest and exclusively for private and political interests and they do it all while using Tor/Tails.

The irony is thick. The reality is, the attacks on independent entrepreneurs and high profile advocates for the Open Source movement is first and foremost about controlling innovation, mitigating perceived corporate risk and managing change. Protecting monopolies by stifling digital evolution. Protecting the dynasties, the old boys’ club.

Serving the general public is barely on the radar. They are at the bottom of the access spectrum where technology is concerned. First comes the military – then the military-industrial complex (these days easier to think of it as the military-commercial complex thanks to the wonders of privatization of functions that were traditionally performed within the realm of government) – then comes commercial, then comes the American public and select others – then follows the rest of the first world countries in the order in which they are favored by the Americans, and then follows the rest of the world.

This is precisely why projects like Tor are initially government-funded, and why  the attacks on them begin at the point at which the technology is finally open-source and filtering through into the public sphere.

In the rare situation where a technology makes it to public access while still being a part of the critical infrastructure of the upper echelon, such as appears to be the case with Tor, the undermining becomes even more venomous, as the stakes are considered to be higher for those in the seat of power and privilege.

It also results in an ongoing stake in the maintenance and further development of the software. For the beauty of open source is that it provides a free ‘core’. A platform upon which governments, and anyone, can build, customize and deploy their own tailored solutions.

Therefore there can be countless extensions or plug-ins to Tor, which, dependent upon license conditions and the willingness of various parties to adhere to them, can allow infinite versions of the software to exist other than that which is freely available to users via the official website.

It is of course, also about how it is used in conjunction with other things – a connector rather than the entire proverbial pie.

Other Recent Criticisms of Tor

It must be frustrating to be Jacob Appelbaum. He gets up on stages as at #30c3, tells the world incredible and important things, hopes like hell they understand what he’s talking about, works his butt off to advance open source technologies, and still gets crapped on regardless.

His often-touted ‘six figure salary’ is a fraction of what he could clearly earn contracting in the corporate sector and yet a dedicated set of detractors – ironically many within the halls  of government and not just random troll personas on Twitter – constantly try to take him, and Tor, down a few notches.

And they are prepared to sink to any low to do it. One of the troll themes is that Tor enables child predators/abusers/pornographers. Tweets and no-name blog-posts that aren’t worthy of being linked to here, accuse Tor developers of being somehow responsible for facilitating the most disturbing perversions of mankind.

This accusation can also be found in the comments section of Quinn Norton’s Pando piece: Clearing The Air Around Tor. The obvious rebuttal is absent. Almost every internet platform in history has been used by child predators and pornographers.

From #horsesex, #dogsex and #familysex on IRC throughout the 90s (and probably 00s), to Yahoo! chat, to Craigslist – to even Second Life and a variety of online children’s gaming platforms, virtually no software community has been free of the invasion of unsavory characters using technology to commit crimes.

Are all to be equally punished? Or only those whom it is en vogue to attack?

While Quinn promoted her article on Twitter as being “about what makes @torproject very good indeed, & how the community can make it better” it contains a number of criticisms and appears on a website that features an entire slew of anti-Tor conjecture.  The first internal hyperlink Pando has added to the article leads to Yasha Levine’s piece “Tor Spooks” – pretty much rendering Quinn’s fence-sitting posturing moot by association.

Scroll to the bottom of the article and not only will you find that Quinn Norton is a “Social Justice Navy Seal” but that there is a whole row of other related anti-Tor articles for you to select from. In fact they are coming thick and fast, with another Pando op-ed implying that Quinn’s critical assessments of Tor posted to an anti-Tor website were despite her being “pro-hacker”. Very interesting that they would create this internal polarity – an illusion of opposing views, for Quinn claims:

“The Tor team and general information security community have not proven to be good at communicating with regular people. Tor is no magic bullet”

This comment is remarkable, given that when you launch the Tor browser, you immediately see: 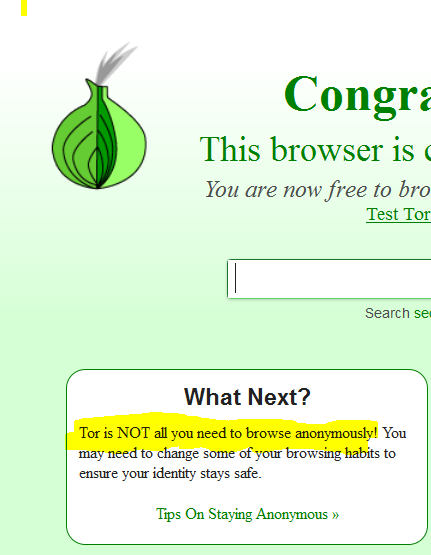 It is difficult to imagine how Tor could be any more matter of fact than that. Regardless of whether it has a pretty interface, Tor has struck a great balance between low word count and high quality content. It is actually very approachable linguistically and easy to navigate. The standard of documentation is excellent.

Is it marketing-driven corporate drivel? No. You can accuse them of not campaigning like Coca-Cola but it is unfair to suggest they are less than upfront about the capabilities (and liabilities) of Tor, or to hold their geek status against them when it comes to their ability to communicate with users.

“I’d also like the community of Tor supporters and Tor developers to tell a better story, more true to what Tor is and does, so that we don’t run into these kinds of misunderstandings. And even more important, so that users at risk don’t misunderstand and misuse this powerful but specific tool.”

At this point, other than cutesy little animated videos explaining things in a reeeeeeeeeeeally slow voice, it’s debatable whether the Tor story can get much more approachable than is apparent in its ongoing penetration into the mainstream.  As for ‘misunderstandings’ – if there were one or two comments about Tor on Pando that may be a valid adjective, however with the persistence and sheer quantity of the anti-Tor material posted on Pando, it is clear there is such a heavy investment in lambasting Tor that they are unlikely to cool their heels anytime soon.

Pando have the nerve to claim they are the victims of a “smear”. When we see a Tor website with a sliding gallery of anti-Pando articles that may seem more plausible. But for now the proof is in the pudding, and Pando’s counter-revolutionary tabloid-style narratives (yes, this is the publication that once referred to Justine Tunney as the “leader” of Occupy Wall Street, a leaderless movement) are very much transparent to even the most casual of observers.

But putting the haters aside – it really is time to ask, why have open source engineers becoming political targets? Why will rogue trolls and stalkers try to mess with your life if you work for the Tor Project?  What is standing in the way of human innovation and how can we stop the suppression of evolution?

Most important of all – how can we close the technological access gap to keep a level playing field between both ourselves and those government employees who claim to act in our interest – without being labelled criminals or terrorists or being added to watch-lists, all for the audacity of having aspired to the enjoyment of the same privacy protections as our esteemed political representatives?